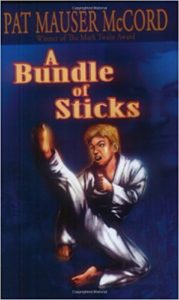 A Bundle of Sticks
Pat McCord

I first met Pat McCord through Facebook, that magical jungle. She is a fellow copywriter; however, after talking to her for a quite some time, I discovered that she is also a kindred soul. In this particular question and answer interview, I asked Pat questions, and really, I don’t want to tamper with her answers. They shine for themselves. Her voice sparkles through all of it.

I will continue to interview writers for my blogs. Maybe you want to be one of them?

And I hope this is just the first interview with Pat. We can learn so much from her! Today, we are talking about writing children’s books, one of Pat’s specialties, and I sense, also her great love.

Q: Pat, when did you decide that you wanted to write children’s books?

A: I decided at 12 that I wanted to be a writer (not necessarily a children’s writer). That was a bit odd, because I have serious dyslexia and was even considered a little retarded at one time. I did not read until about 4th grade.

At 12, we lived in Spokane, WA, and I’d sit under our apple tree out back and write stories. I was so proud of my first “novel” because it had real chapters and dialog.

In 7th grade, my teacher Mr. Smith, gave several of us the opportunity to work with his wife learning to be “freelance writers.” She was published at the time in Redbook magazine. She brought in the Writer’s Market, just a magazine at that time, and showed us how to find appropriate publishers and send in our stories.

My first effort went into the mail on tablet paper in pencil. I waited every day for the money to arrive in the mail, but that turned out to be the start of a fairly extensive rejection slip collection. But I kept writing because it was fun. Other kids in that first group were far more talented than I was.

In college I studied under Herbert Arntson, a successful children’s novel writer and writing professor. He encouraged me to try that genre, and I did. But it still took me until I was almost 30 to get published.

One thing I did that made all the difference was that I went against advice and went straight to Atheneum, part of MacMillan at the time (now Simon & Schuster), rather than try a local publisher first. My reasoning was that I’d start at the top and work down, not the other way around.

I’m a big believer in entering contests. I won 2nd place (only) in the Pacific Northwest Writer’s contest for children’s literature and used that as a credential. Plus, the contests are often judged by editors, and that can be an in.

Q: How does copywriting fit into your writing life?

A: Copywriting, very simply, has been a way to more money. I work on my own writing every single day, and fit the copy around it. I do not always have clients—they tend to come in spurts. One of my “controls” has been running for 8 years, and I do earn royalties!

Q: Do you have an agent?

A: I did not have an agent at first. After Atheneum released my first book, I got some amazing reviews. I was simply lucky. “Mauser (my name then) writes like a seasoned pro.” An agent saw the review, so when I wrote to several agents looking for representation, she knew who I was in a general way, and took me on. She was with Writer’s House. After she started her family, I was assigned to a second agent at that house. I did the next 3 novels with them. After that I had several other agents at different houses. Emilie Jacobson at Curtis Brown, Ltd was a favorite, one of the originals who was kind of a queen bee in New York. I was utterly shocked and saddened when she died. I had one other agent, a man, with whom I explored some TV and movie projects, and had an “almost.” But my adult son became very ill and I had to do the caretaker thing for a time. Who knows whether those projects can be resurrected!

Q: How did your career evolve?

A: Children’s literature went through a slump in the middle of all that, I went through a divorce, and I was forced to find a full-time job. Boeing hired me to write for their version of United Way, but that morphed into science writing, news, PR, and everything else. At one point, I took a voluntary layoff from Boeing and worked for Microsoft writing game products for kids. I was the writer on the “Magic School Bus” CD-ROMs. (I wrote the words, not code).

Children’s books have been up and down. I was lucky to win some awards, primarily for a martial arts novel A Bundle of Sticks, which was also under consideration for a TV movie. Used copies are still out there, but the language is definitely dated. I made major money on that novel over several years—well over 6 figures. All my other books “paid out” until the last one (more later) and I made some nice royalties, but nothing amazing.

I actually don’t know if this is still a viable way to earn money with children’s literature, but I used to make about half of my income doing speaking jobs like Young Authors’ conferences and librarian’s luncheons, etc. I charged $500, but some authors, particularly the men (!!) charged far more at that time. Yes, I did make a living for many years.

A: I have not published a new children’s book for a while. I have had more rejection slips and turned to other projects. At least one of those books still intrigues me, and I may try again. I do know that children’s books now can be more “edgy” with more danger, sex innuendo, gore, whatever. Things we once thought of as irresponsible for children’s books are now being done. By the way, I don’t do children’s picture books. I suspect that’s a different world. I have heard from writer friends that young adult (YA) is hot again.

Q: What advice to you give young writers of children’s literature?

A: Advice: Ignore me if this doesn’t fit! Just DO it! We all get better, and rejections are a comment on fit more than quality. Take a few classes, but don’t make that your occupation, or you could get addicted to praise—same for writer’s critique groups. Groups can be wonderful or they can be awful, depending. That said, I still have friends who were once in critique groups with me. This will surprise you: I don’t read a lot of children’s books. I love to write them, but I worry about contamination—writing something “like” something else. A LOT of authors disagree with me on this. If I were to enter children’s literature now, I think I’d try to be more different, take more chances. The publishing industry is really struggling, and if you don’t have a name, I suspect they’re looking for the one-off, the odd-ball, the thing that could get some attention.

Q: Will you please give us a list of your books?

A: My books: www.patmccordbooks.com Also, Amazon.com under McCord or Mauser. How I found Myself at the Fair

A Bundle of Sticks

Love is for the Dogs

Pictures in the Dark

Murder on the Rise (coming)

Fear of Flying: What you need to know to be safe in the air

Q: What other gems of advice can you offer us?

I am not currently writing for children, though I do have several manuscripts on hold. Children’s literature is an art form, not just the lesser of adult novels. It can be difficult because you have to be able to get inside the heads of kids at different ages. BUT, some of the pluses are, frankly, that the books are much shorter, you can often revise in a single sitting, there are tons of them published even now, and men (in particular) are in short supply as authors these days. BTW, in case your readers don’t know, the publisher generally chooses the illustrator; they love doing it and it’s their artistic contribution. If you are super talented as an illustrator, that’s different.

Q: So, you encourage us?

Message: You can do this. Even if you don’t have children or are not around them, you used to be a child, and that may be all you need. Pictures in the Dark is taken from my own childhood and has gotten my best reviews ever (I shaped it into a mystery). Unfortunately, the publisher made a major error on release and the book all but died without paying out. Things happen. In this case, it was one of the reasons why more recent books have been done on Kindle. My view is no good book should go unpublished. Do have it professionally edited, though. Email me if you need a name.

As a note to Pat: I never realized that you were behind that Magic School Bus material! My daughter grew up loving every bit of it!

Pat, please don’t stop talking to me! We need you. We love you.