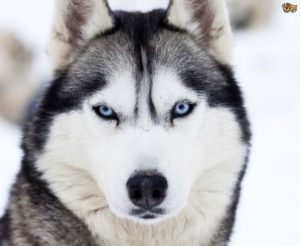 For the Love of God and Dog Huskies Help Priest Spin Divine Yarn By Maria Jacketti Father Carmen Scuderi, OFM a Byzantine Catholic Franciscan priest, has been pastor of Saint John the Baptist Byzantine Catholic Church in Hazleton, PA for 11 years. Following the true path of Saint Francis, he cultivates a love of animals and enjoys daily spiritual kinship with them. However, few know how far this devotion has reached. Over the years, Father Carmen has fostered 12 dogs – mostly rescued animals – in the rectory. And they’ve returned the favor. Using the dogs’ fur, the priest fashions a unique yarn that he turns into scarves, sweaters and other clothing. His initial urge to get several dogs demonstrated various levels of need and intention. Aside from his obvious affinity with canines, he noted that the rectory had suffered two break-ins prior to his arrival. Historically – and in fact since ancient times – there has been no better security shield than a strong dog. Ideally such a guard should be menacing in times of need, and yet affectionate and loyal to its master during ordinary hours. For Scuderi, the Siberian husky fit the profile. On the day of my visit to Saint John’s rectory, three huskies greeted me. The intuitive, very large and wolf-like dogs checked me out, and soon noted that I was a friend. From that moment on, it was a love fest. At the same time, it was clear that they are formidable dogs who thrive in packs, just like their ancestor, the wolf. Tuvok, a husky, named after a “Star Trek” Vulcan; because of his distinctive ears (perhaps more people would be more familiar with the uber-elf ears of Mr. Spock), immediately claimed me as his guest and sat at my feet I felt very well protected. Apollo, another male stayed nearby. At one point, all three dogs faced the northwest and howled for several minutes in chorus. Something in their DNA called them to turn toward the northwest and sing; it was a rather sacred moment, for the dogs were demonstrating their own unique form of ancient communication, a veritable canine aurora borealis. A member of Saint John parish later informed me the dogs can sometimes be heard howling (not barking) during the Divine Liturgy, as if trying to add their own notes of prayer to the service. I could only imagine the joy of it. Father Scuderi’s huskies have a wonderful home and their demeanor demonstrates the meticulous care they receive. The animals have two coats, a downy, almost angora-like undercoat, which is silky and plush, topped by a rugged coat of water resistant, coarse hair. Although they molt twice a year; they require daily grooming, yielding enormous amounts of rugged fluff. A practical man, not given to wasting good things, Father Scuderi decided to save the hair and create a legacy. He purchased an old-fashioned spinning wheel – like the ones we know from fairy tales mostly – and taught himself to spin the dog hair into one-of-a-kind yarn. The entire process took him two days. I doubt that most of us could duplicate that light speed learning curve. I entered Father Scuderi’s spinning room with dogs in tow. Their intelligence shone through ice-blue eyes as if they sensed that they were cocreating this story. The workspace sparkled with an aroma of pine and in one corner, two huge garbage bags stood, overflowing with husky hair. Waterfalls of the gauze-like hair cascaded over the sides of the bags. Clouds of it seemed to waft above the overstuffed containers. I was curious to see if my own cats could ever yield enough hair .to spin into yarn. Upon witnessing how much hair it takes to make the fiber, I relinquished my dream of spinning feline hair into yarn. Even my fuzziest cat could not yield such a quantity of raw material given years of brushing. Nevertheless, I became enthralled with the process of making husky yarn. Father Carmen explained that it is possible to spin one, two, three, or even four-ply varieties. One-ply yarn is the easiest to create and best suited for knitting or crocheting socks. Two or three-ply makes a sturdier yarn for sweaters, or other enduring garments, while four-ply yarn is tough enough for rug-making. While Father Scuderi’s dogs have many colors dappling their collective fur – black, white, cream, wood-brown, and russet – the final blended yarn tends toward a shade of ecru, or earthen beige. It is possible to dye the yarn just as one might tint sheep or goat’s hair; nevertheless, Father Scuderi prefers keeping the natural tone, as a reflection of his dogs’ true colors. Items that he makes with the resilient yarn can be cleaned in a simple cold water wool wash, just as one would do with ordinary delicate clothing. To date, Father Scuderi has knitted and crocheted scarves and hats. His current project is a sweater. Everything about what Father Scuderi is doing echoes a lost art. While not the first to make yarn from dog hair-a tradition of doing this exists in Europe, and is well documented in Poland – he has turned grooming his dogs, collecting their fur, and spinning it into yarn into a spiritual practice. “It is meditation,” he says. Truly, everything about the endeavor radiates peace. His dogs enforce serenity in the rectory environs with their regal, wolf-like presence, but they, too, one day will pass into their own hereafter; true to the cycles of nature that govern all of us. Over the years, Father Scuderi has lost a number of dogs to old age. The clothing made with their fur does not imply immortality; however, it continues to hold something of the dogs’ spirit in its deepest fibers. And I would not doubt that if the right wind blew through Father’s soon-to-be sweater, we might hear a gentle howl – and call it prayer.