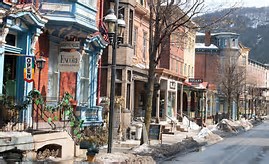 I live in a small city. The last census listed our population at about 25,000 people. However, that number is obviously low. We have an amorphous yet significant number of undocumented aliens here, and that fact skews the number into a range of diminutive statistics, according to some.

Nevertheless, Hazleton, Pennsylvania, remains a small city even if our true population registers at closer to 35,000 residents, with our size being one of our greatest virtues as we look ahead to evolving the city in the 21st century.

For two decades, my family and I lived outside of New York City and became subject to long, grueling commutes simply to get to work. Before we moved back to Hazleton, my last job required that I take two buses and walk to my destination: a tutorial center in West New York.

Each commute took two hours. I traveled only 11 miles each way!

This traveling ate up four hours of my day, exhausted me, and defied any compensation or benefits I was receiving. Quite simply, I hated living this way. Often I considered how the folks back in Hazleton would scoff at my daily journeys.

Of course, I tried to make the best out of the time spent on the road. Mostly, I listened to books on tape. And that worked a little. However, when one starts and ends the day in a state of grumbling exhaustion, little of what is heard, gets processed. Enjoyment proved rare, and material retention, sparse.

If one is a millionaire or billionaire, big city life can be glamourous. For those who ride the buses and subways, it is often an exercise is systematic de-humanization. As the 21st century moves into full flower, more and more people will decide that the rat race that their parents endured is nothing to emulate.

Yet, at least in my city, kids who get their college or even high school diplomas look for bright lights, night life, and emerald pastures. Most will also settle for living Type A days, and walking that walk.

I know that gait very well. It is a type of robot mode that one enters, walking briskly with tunnel vision on the way to work. All of life around one’s person blurs. If you slow down to really observe what is going on around you, you must be a tourist! And surely you will be late for work.

This is the definition of corporate personhood: To quote Pink Floyd: “All in all, you’re just another brick in the wall.”   You work as a cog in a carnivorous machine among myriad strangers.

Yet life back in the small cities, particularly here in the Rust Belt, has been far from idyllic for a long time. It is true: the cost of housing is at least 1/10th of that in the Big Bad Apple. Frankly, that is a conservative estimate. At the same time, rents have been rising since the Great Recession of 2008 when many people were displaced from their homes.

If I were not able to telecommute for a living, life here might actually be impossible, that is, unless I chose to elect to slog at per diem job at the Amazon warehouse.

In terms of my own city, which still holds on to that one-trick pony, minimum economy and mentality, many changes are needed. It can all begin with a visioning process; however, to effect real change, lots of difficult work remains ahead. In fact, we need to seduce small green start-ups; that is, we need to get them to look at what our ugly duckling- Appalachian- elfin metropoli has to offer.

There are several qualities that stand out like diamonds.

First, we offer space for start-ups at a fraction of the cost of the true metropolitan areas. In our unique case, we  lie just a jackrabbit’s leap away from the only intersection of Routes 80 and 81 in our country.

Start-ups that might take root here will be attractive to the weary souls who have wagon-trained their way to work over any period of time, as costs associated with driving plummet and relaxation and family time inevitably soar.

The single telecommuter will not find scintillating night life in most of these cities. Yet opportunities for artistic expression and expansion loom as wide as prairies. Ultimately, it is a sense of home that matters the most.

I cannot imagine the rest of my life being anything but home-based.

Yes, I know, if the lights were to go out, and the nation’s electric grid fail, I would be put out of business. However commuters might find themselves in an even worse boat